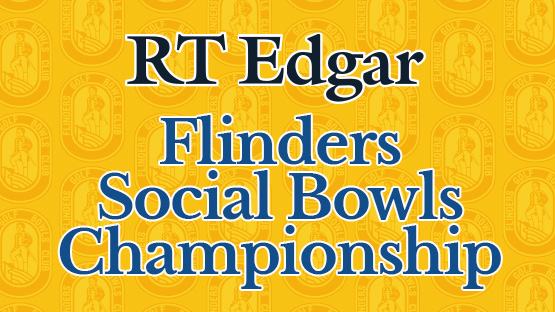 It is safe to say that the very first ever RT Edgar Flinders Social Bowls Championship was a resounding success.  Feedback from participants, sponsors and spectators alike was overwhelmingly positive and enthusiasm for another similar event is high.  No problem – we will do.

Round 2 was played in great spirit last week under difficult conditions – a very unpleasant rain squall fortunately stopped just as play was due to commence and we didn’t lose any time.  Cold and windy though.   Winners of Round 2 were the Flinders General Store, much to the delight of all their players.

Then we had the Round 3 Grand Finale this week.  Teams were seeded according to their win/loss and shots up or down record for Rounds 1 and 2.  Top 4 on the ladder and therefore in contention for the major trophy were Round 1 winners the Flinders Op Shop, Working Class Heroes of Flinders (Pier Provedore), The Flinders General Store and The Queen Bees (Flinders/Shoreham Bee Group).  The other two divisions played off for the minor prizes.

Seven ends were played in the first half then we had a break for sausages, ice creams and to listen to the fantastic live music (see below).  Then another eight ends, which finished in the gathering gloom of twilight.  As there has been each week, some wonderful bowling and enormous fun was seen on the green.

To their great delight, the Flinders General Store came out as winners of the trophy.  Congratulations to all their players over the three weeks – the final night’s team was Will Tuck, Peter Howard and Greg Brough – a very happy bunch.  Mind you, Kate Parton had already confidently decided on a spot in the Store to display the trophy!!

Division 2 was won by the Cook Street Collective, with the loser’s final won by The Sailors Team.

Division 3 winners were D’Dog’s Team (golf club hospitality staff), and the loser’s final was won by The Roar (one of the Lions Club teams)

The Encouragement Award went to another Lions Club team – The Wild Cats.  Better luck next year!

Phil from Somerville Quality Meats supplied the sausages for the sizzle and generously donated one of his famous meat trays for the raffle.  Thanks Phil.

Thanks also to the fantastic members who volunteered on each of the nights.  Particularly for the final – Roger Wilson, Len and Kerrin Nelson, Col Adamson, Claire Thorn, Jan Aitcheson, Chris Jones, Keith Hando, Arie Veenman, Arthur Pattison and Giselle Horvat as photographer and videographer.

And of course our thanks again to our major sponsors for this event – RT Edgar Flinders.  Sadly their team, The Auntie Ednas, did not challenge for the trophy this year but they’ll undoubtedly come back bigger and better.   Holly Longmuir spoke after the game of her history of playing bowls in Williamstown with her grandmother when she was only 16 – very fond memories indeed.  We are greatly appreciative of the support of Holly and RT Edgar and very much look forward to working with them again in the future